Note: With the upcoming Independence Day holiday, we are distributing this Network Update one week earlier than scheduled. Our regular biweekly schedule will resume on Friday, July 12. 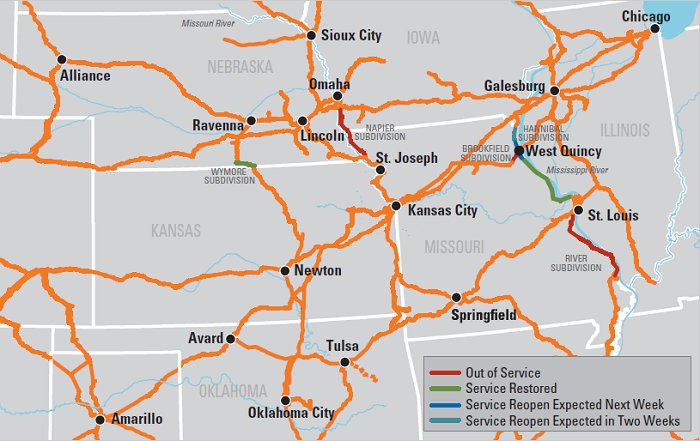 Water levels of the major rivers in Iowa and Missouri are still slightly above flood stage but forecasted to continue slowly receding during the next several days. Nearly 20 more miles of the Hannibal Subdivision are expected to reopen early next week, with the remaining nearly 30 miles between Keokuk, Iowa and LaGrange, Missouri reopening the following week. While we also had expected to reopen the nearly 5-mile closed segment of the Brookfield Subdivision early next week, water remains more than two feet over the rail in one location. An estimate on when service will be restored on this segment remains pending. The River Subdivision is currently expected to reopen in mid-July and the Napier Subdivision in late July.

Overall service performance on the network held relatively steady with levels reported during the previous week. As maintenance activity on the network remains in full swing, a new bridge was placed into service on Tuesday on our busy Fallbridge Subdivision in North Bonneville, Washington. The new span over Hamilton Creek, which was constructed during the past year, replaces a bridge originally built in 1908. This is the first of two bridges in a combined $30 million bridge replacement project this year on the subdivision. The other new bridge will be installed approximately 10 miles east of this location in early August.

First BNSF train crossing new bridge in North Bonneville, Wash. - June 25, 2019
Independence Day Holiday Operating Plan
BNSF's Carload operating plan for Independence Day, July 4, will remain focused on meeting customers' expectations while matching operations to any reductions in traffic volumes. Trains will operate normally on Thursday, July 4, however, we will minimize the number of yard, local and road-switch assignments at terminals on July 4 if specifically advised by customers that service will not be needed.

Connecting carriers who have reduced operations for the holiday may cause delays on interline traffic. Customer Support will maintain a limited staff on Independence Day, with standard coverage resuming on Friday, July 5.

Service Expectations for the Week Ahead
An active weather pattern is expected for the Plains and upper Midwest next week with periodic chances for storms. Favorable operating conditions are expected in other areas of the network.
BNSF operating teams will remain focused on balancing resources with train flows during the upcoming holiday week. Major maintenance work will continue across multiple areas of the BNSF network, particularly along our primary Northern Transcon route through Montana. Some trains may experience delays due to daily work windows in several locations.

Below is a look at the key operational performance categories for the week ending June 27:

Total trains held for the week increased by more than two percent with an average of 136.6 trains held versus 133.3 trains held during the prior week.


Car velocity, measured in miles per day (MPD), was down by more than one percent at 193.6 MPD versus 196.0 MPD recorded the prior week.


Train velocity, measured in miles per hour (MPH), was down by nearly two percent versus the prior week at 15.7 MPH.

Terminal dwell decreased by more than one percent versus the prior week at 26.4 hours.


As always, we thank you for your business and appreciate the opportunity to serve as your transportation service provider. We welcome your feedback and questions.